ACT-IAC IT Management and Modernization Community of Interest

ACT-IAC is proud to support the Federal government’s goal to implement TBM government-wide by 2022 and increase IT spending transparency.  A focused workgroup including IAC industry volunteers and government representatives developed an IT Spending Transparency Maturity Model which addresses an action within the Federal Data Strategy 2020 Action Plan, Action #9 - ‘develop an IT spending transparency maturity assessment model by September 30, 2020’. Agencies can leverage this tool to support their Technology Business Management (TBM) Implementations; measuring current state and steering continued maturity based upon desired target state.

This free Maturity Model is intended to help agencies adopt the TBM methodology and data standards. TBM is a value management framework that provides CIOs with standards and best practices to communicate the cost, quality and value of IT.  The Maturity Model was adapted from commercial and government TBM model best practices to fit the needs of all agencies, regardless of their current TBM maturity. It is available for use and while developed for agencies, applicability spans beyond federal sector.

The new TBM Maturity Model turns qualitative activities into quantitative metrics.  It provides a mechanism for agencies to measure progress and offers a way for teams and leadership to be aligned on what matters most.  Most important of all, it helps U.S. government agencies be more effective, efficient and accountable to the taxpayers they serve through transparency and continuous improvement. 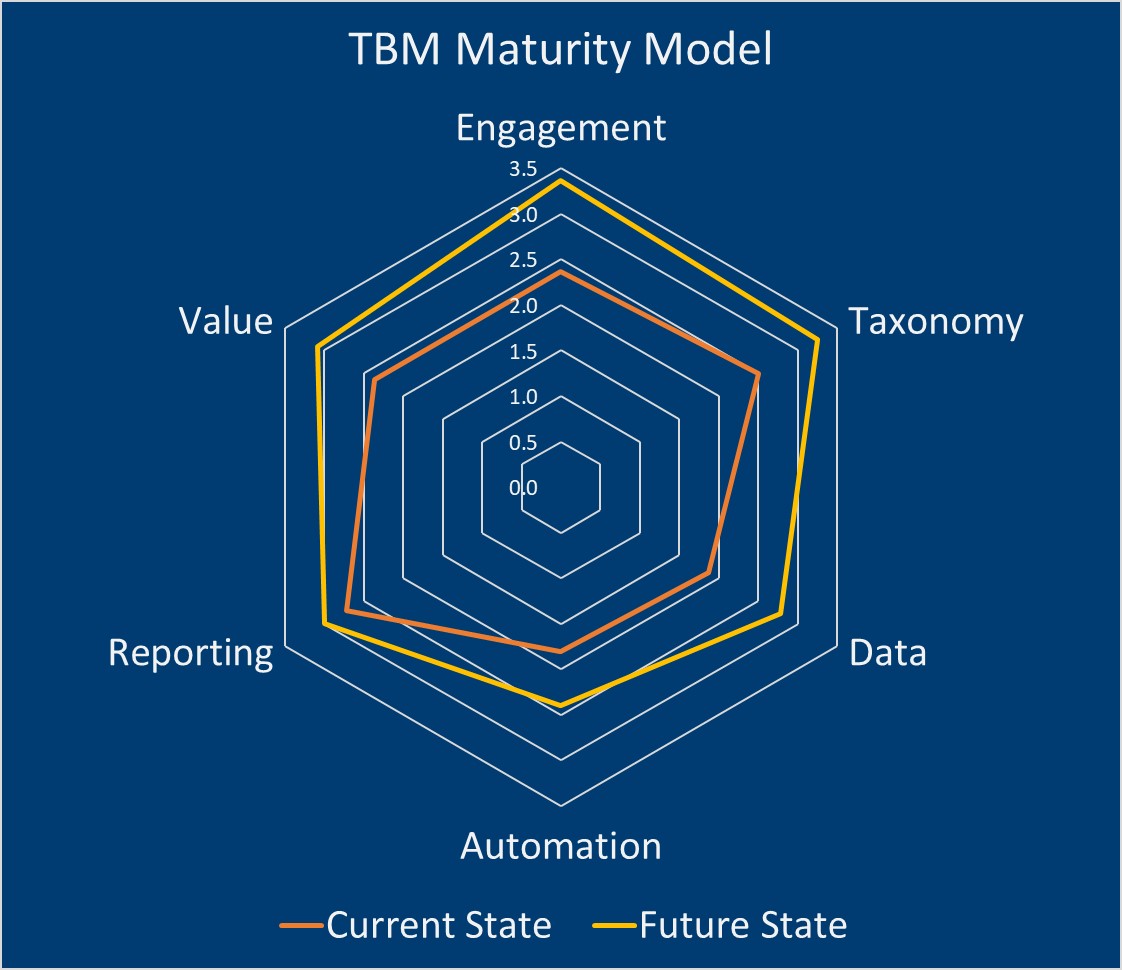 “It’s important for federal agencies to continuously improve their understanding of their IT portfolios so they can make better investments. These two resources are designed to give agencies a more complete picture of the current and future states of their IT portfolios to inform sound, financial decision making.” according to Daniel York, Director of IT Spending Transparency, Office of Government-wide Policy, General Services Administration.

Kelly Morrison, who served as the industry lead for this project shared, “This project is a great example of ACT-IAC engagement that addressed an action and advances government. The Maturity Model can be taken for both the current state and a timeframe in the future, which will help organizations prioritize where to put forth effort to move the needle.” Additionally, Morrison adds, “This project illuminated the need for a standard and I look forward to exploring how ACT-IAC and the TBM Council might collaborate on this and other efforts that could have broad reaching impact and value.”

The new model is now available and can be accessed from CIO.gov here. The accompanying IT Spending Transparency Maturity Model white paper is also available here.

A special thanks to Dan York, ACT-IAC IT Management and Modernization CoI Government Chair and Government Project Sponsor for this effort, our IAC industry volunteers, and government volunteers:

The open source TBM framework and taxonomy is governed by the TBM Council, a not-for-profit organization and overseen by a group of academic and commercial information technology executives.