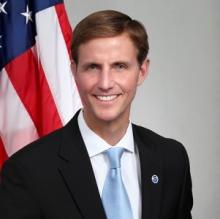 Rear Admiral Gallaudet is the Assistant Secretary of Commerce for Oceans and Atmosphere and Deputy Administrator of the National Oceanic and Atmospheric Administration (NOAA). From 2017-2019 he served as the Acting Undersecretary of Commerce for Oceans and Atmosphere and NOAA Administrator. Before these assignments, he served for 32 years in the US Navy, completing his service in 2017 as the Oceanographer of the Navy. In his current position, Rear Admiral Gallaudet leads NOAA’s Blue Economy activities that advance marine transportation, sustainable seafood, ocean exploration and mapping, marine tourism and recreation, and coastal resilience. He also directs NOAA’s support to the Administration’s INDOPACOM-Pacific Strategy, oversees NOAA’s Arctic research, operations, and engagement, and is leading the execution of the NOAA science and technology strategies for Artificial Intelligence, Unmanned Systems, ‘Omics, Cloud, and Citizen Science.

Rear Admiral Gallaudet chairs or co-chairs several interagency bodies, including the Coordinating Board for the Committee on the Marine Transportation System (CMTS), the US Coral Reef Task Force, the Alaska Mapping Executive Committee, and the Ocean Resources Management Subcommittee (ORM) under the White House Ocean Policy Committee (OPC), of which he is also a member. Other committees on which he serves include the National Science and Technology Council’s (NSTC) Select Committee on Artificial Intelligence, the NSTC Committee on STEM Education, the Policy Coordination Committees (PCCs) under the National Security Council (NSC) on Pacific Island Countries, the Arctic, and Maritime Security, and the Executive Steering Group of the National Space Based Positioning, Navigation, and Timing (PNT) Executive Committee.

Rear Admiral Gallaudet’s top priority at NOAA has been people. He has been a vocal champion for NOAA’s diversity and inclusion, leader development, coaching, facilitating, new supervisor training, and awards programs. As acting Administrator, he directed the establishment of NOAA’s mentoring program, the agency’s sexual assault and harassment prevention and response program, and the establishment of NOAA’s workplace violence prevention director.

Rear Admiral Gallaudet has a Bachelor’s Degree from the US Naval Academy and a Master’s and Doctorate Degree from Scripps Institution of Oceanography, all in oceanography.