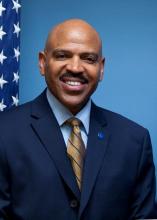 Mr. Michael B. Smith is a retired Senior Executive from the Department of Homeland Security (DHS) and currently serves as the Founder/CEO of Access Government Services and Executive Vice President with GovConRx where he uses his vast federal acquisition experience in contracting, performance management, program management, and logistics to provide full service acquisition consulting services for companies doing business with Federal, State, and Local governments.
Mr. Smith formerly served as the Executive Director of the Department of Homeland Security (DHS) Office of Selective Acquisitions (OSA) within the Office of the Chief Procurement Officer (OCPO) where he led the execution of classified and sensitive acquisitions for several DHS customers across the headquarters and component organizations. Mr. Smith is recognized across the Government as a true innovator and transformational leader. He has over 34 years of experience in Federal procurement and acquisition-related fields including several positions of increasing levels of responsibility.

Mr. Smith has worked in a wide variety of acquisition positions throughout his career, but has maintained a focus on national programs and department-wide acquisitions.  Prior to serving as the Head of the Contracting Activity for OSA, he also served as the DHS Director of Strategic Sourcing where he was responsible for achieving savings of over $2.5 Billion by helping consolidate and unify requirements across DHS.  During the stand-up of DHS he served as Associate Director for Strategic Initiatives in the Information Technology Acquisition Center, and also as the Director of the Enterprise Solutions Office, and as the Program Manager for the Department of Homeland Security’s $48 Billion EAGLE and FirstSource acquisition programs.

In addition to DHS, his Federal experience includes: the Army Corps of Engineers, Marine Corps Research Development and Acquisition Command, Department of Commerce, and the Department of Veterans Affairs. His private industry experience working in business development also provides a unique perspective and appreciation for the issues that are important to both the public and private sectors.  In addition to his civilian career, Mr. Smith started his public service career as a U. S. Marine, and is a retired officer in the U.S. Army Reserves having held multiple leadership positions from Company through Theater level organizations.

Mr. Smith holds a Master’s Degree in Public Management from the University of Maryland School of Public Policy, and Bachelor’s Degrees in Marketing and Economics from Kentucky State University.  He is a 2011 Service to America Medal Finalist and was honored by the United States Senate as a Great American Federal Employee for his work in Strategic Sourcing.  He is also an Excellence in Government Senior Fellow, and the recipient of the 2014 DHS Secretary’s Silver Medal award for innovation and leadership.