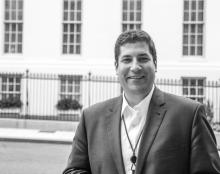 Special Assistant to the President for Innovation Policy and Initiatives

Mathew Lira currently serves as the Special Assistant to the President for Innovation Policy and Initiatives at the White House Office of American Innovation, where he works to coordinate priority policy initiatives for the office. Throughout his career, Matt’s work has placed him at the cross-section of politics, government and the emerging digital economy.

Prior to his time at the White House, Lira spent over a decade on Capitol Hill working on the senior congressional Leadership staff, serving as a Senior Advisor to then-House Majority Leader Kevin McCarthy and former House Majority Leader Eric Cantor. During the 2014 election cycle, Lira served as the Deputy Executive Director of the National Republican Senatorial Committee. In 2015, Matt served as an Institute of Politics Fellow at the Harvard Kennedy School, focusing on the political and policy impacts of the digital economy.

Throughout his work in government, Matt has aimed to forge trust and consensus by bringing stakeholders together to make substantive progress. In an era of deep partisanship, his work has frequently earned support from both sides of the aisle.