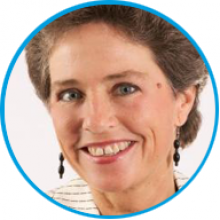 Leslie A. Barry (lbarry@actiac.org) (703-208-4800, ext. 225) joined ACT IAC in September 2019 as the Director of Professional Development.  Leslie has been involved with the Professional Development program at ACT-IAC for over 20 years.  She graduated from the Partners Program in 1998 and was then industry chair of the classes of 2001 and 2002 and chaired the “P3 Alumni conference” from 2003-2005.  While on the IAC Executive Committee in 2004-007, Leslie was instrumental in creating the Voyagers Program in 2005.  She has maintained her involvement with the Fellows Alumni and has maintained the “Fellows News” since 2007 and received the “Super Fellow” award in 2016.  Over the years, Leslie has been involved in most of the committees at ACT-IAC, including the planning committees for ELC and MOC.  Leslie’s current portfolio covers Fellows, Partners, Voyagers, Associates, Nexus and the ACT-IAC Academy.

In her professional career in Business Development, Leslie has worked for a myriad of companies both large and small throughout her 30 year career in federal government IT.  She has also served on the boards of AFFIRM and GITEC for over a decade.  Since 2004, Leslie has led an annual group of IT leaders to Nicaragua and the Dominican Republic on service learning trips to build homes for those who need them.  Ms. Barry also helped spearhead the annual “Operation JumpStart” from 2005-2016.  Last, Leslie is a three time recipient of the prestigious Federal100 award and has been named a Heroine in Technology.