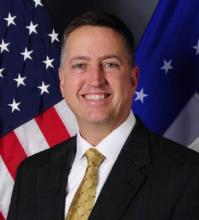 James H. Smith, a member of the Senior Executive Service, is the Acquisition Executive for United States Special Operations Command (USSOCOM) at MacDill Air Force Base, Florida. He is responsible for all special operations forces acquisition, technology, and logistics.

Mr. Smith, a native of Lyndhurst, New Jersey, graduated from the U.S. Military Academy in 1986 and was commissioned as a Second Lieutenant of Infantry. He served initially with the 3d Infantry Division in Kitzingen, Germany, as Bradley Platoon Leader, Heavy Mortar Platoon Leader, and Company Executive Officer. He then served as the 2d Brigade’s Assistant Operations Officer and Rifle Company Commander in 5th Battalion, 21st Infantry Regiment of the 7th Infantry Division (Light). Following receipt of a Master of Science in 1995, he served as Associate Professor in the Department of Civil and Mechanical Engineering and as Battalion Executive Officer of 1st Battalion, 1st Infantry Regiment at the U.S. Military Academy.

Mr. Smith retired from active military duty on 31 October 2013 after 27 years of service. Immediately upon his military retirement, he was appointed to the Senior Executive Service and selected to serve as the Deputy Director for Acquisition for Special Operations Forces Acquisition, Technology & Logistics.