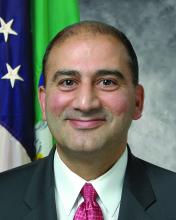 Jamal El-Hindi has served as the Department of Treasury’s first agency-wide Chief Data Officer (CDO) since February 2020, on detail from Treasury’s Financial Crimes Enforcement Network (FinCEN).  In this role, he is establishing Treasury’s new Office of the CDO and leads the vision, design and development of agency-wide data and information strategy consistent with the Federal Data Strategy and statutory mandates requiring the treatment of data as a critical asset to ensure better governmental decision-making and operations.

Prior to serving in the Treasury CDO role, Mr. El-Hindi was appointed as Deputy Director of FinCEN in May 2015, overseeing FinCEN’s wide-ranging work to protect the U.S. financial system from money laundering and other forms of illicit financial activity as a financial sector regulator and the United States’ financial intelligence unit. In these capacities, FinCEN advances national security interests through the collection, analysis, dissemination and protection of financial intelligence collected from the private sector under the authority of the Bank Secrecy Act.

Mr. El-Hindi arrived at FinCEN in 2006, first serving as the head of the Regulatory Policy and Programs Division, and then as the Associate Director for the Policy Division.    Prior to joining FinCEN, Mr. El-Hindi served as the Associate Director for Program Policy & Implementation at Treasury’s Office of Foreign Assets Control (OFAC). In that capacity he oversaw OFAC’s Compliance, Licensing, and Policy functions after having served for four years as an Attorney-Advisor in OFAC’s Office of Chief Counsel.

Before joining Treasury in 2000, Mr. El-Hindi was an associate at Patton Boggs LLP in Washington, D.C., where his practice focused on U.S. regulation of international business transactions, representation of foreign sovereigns, and international banking litigation.   He is graduate of the University of Michigan Law School and Rackham Graduate School; the London School of Economics & Political Science; and the University of North Carolina at Chapel Hill.