ACT-IAC IT Management and Modernization COI May 2021

Join the ACT-IAC IT Management and Modernization COI for a member meeting featuring a panel of government leaders on how they are leveraging technology to enable mission their agency's success in the new normal.

As Assistant Chief Information Officer (ACIO) for the FPAC Mission Area, Darren Ash directs the vision “to deliver modern, customer-focused IT solutions that meet the needs of the Mission Area employees, farmers, ranchers, and producers of America.”

Darren Ash was selected to serve as the Assistant Chief Information Officer (ACIO) for the Farm Production and Conservation (FPAC) mission area Agency in April 2018.  As Assistant CIO, he leads and sets the strategic direction for information technology while working in partnership with agency and FPAC Business Center leadership, and with other USDA agencies to provide information resources for policy and decision making.  In this position, he is responsible for the overall strategic direction of the IT programs, providing guidance and oversight to technology and business system’s modernization projects as well as development and acquisition of new information technology systems and services.  Darren Ash’s former positions include serving as the CIO for the Farm Service Agency, CIO of the U.S. Nuclear Regulatory Commission, and Associate CIO at the U.S. Department of Transportation.  Darren started his Federal career with the Internal Revenue Service and then moved to the Department of Treasury, prior to serving at the Department of Transportation.

Darren has served in various capacities with ACT IAC, starting in 2004.  He has been a government advisor for interest groups, graduated from Partners in 2005, was the Government vice-chair and then chair for Voyagers in 2007 and 2008, was on the leadership team for several ELCs, was ACT President, is currently serving on the ACT Board and as co-chair of the Collaboration Council.

A native of California, he received a Bachelor of Arts in International Studies from The American University, a Master of Public Administration from Syracuse University and a Master of Science in Information Systems Technology. He and his family reside in Potomac, Maryland.

In the course of his career, Mr. Burns has received numerous awards and citations, most notably the Department of the Air Force Award for Meritorious Civilian Service, E-Gov Technology Leadership Award, 2005 Federal Computer Week Fed 100 Award, Federal CIO Council Showcase of Excellence Award, and the Department of Health and Human Services Secretary's Award for Distinguished Service. 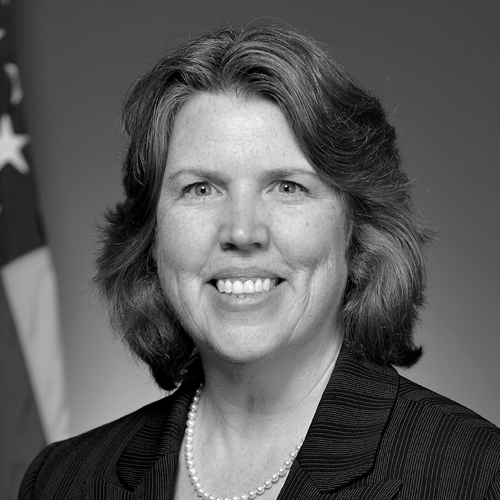 Dr. Kathleen Kaplan serves as the FEMA Chief Data Officer, Chair, Data Governance Council, and Director, Enterprise Analytics Division.  Dr. Kaplan served in leadership positions in four major departments – Energy, Defense, Commerce, and now Homeland Security.  Prior to her government service, Dr. Kaplan served in academia as a professor at Howard University, Oklahoma City University, and Oklahoma State University. Dr. Kaplan received her bachelor of science in computer science with a minor in mathematics from the University of Massachusetts at Lowell, master of science in computer science from the Florida Institute of Technology, and a doctorate of science in computer science from the George Washington University.  In addition, Dr. Kaplan is an Acquisition Corps member and holds the highest certifications in Program Management, Science and Technology Management, and Engineering, along with other accreditations, such as Information Technology, Test and Evaluation, and Quality Assurance.  Dr. Kaplan is also a graduate of the Federal Executive Institute, registered Patent Agent, Professional Engineer in training, and Massachusetts Institute of Technology Fellow.