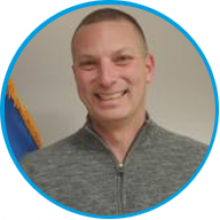 Eric Popiel is a 1998 graduate of the United States Coast Guard Academy in New London, Connecticut. Prior to being hired by the U.S. Office of Personnel Management, he served as an Engineer Officer of the Watch, Auxiliary Division Chief, and Electrical Division Chief aboard the Coast Guard Cutter Chase. In 2001, he graduated from Navy Flight School in Corpus Christi Texas and has flown Coast Guard missions and instructed pilots in both the HU-25 Falcon Jet and the HC-144 Ocean Sentry. His aviation assignments include Air Station Miami, Air Station Cape Cod, and Aviation Training Center Mobile Alabama where he was an Instructor Pilot and Flight Examiner.

Following his aviation tours, he was assigned to the Emerging Policy Staff (DCO-X) under the Deputy Commandant for Operations at Coast Guard Headquarters in Washington, D.C. where he managed the Evergreen Program, the Coast Guard's Strategic Foresight Initiative for 5 years. In this capacity, he utilized various foresight techniques and methods to help the Coast Guard leverage future opportunities, identify emerging threats, and recognize potential blind spots across all 11 statutory missions.

He currently works at the U.S. Office of Personnel Management as a Strategic Foresight Analyst and co-manager of OPM’s Strategic Workforce Foresight Team (SWFT). He is responsible for the long-term futures program that informs federal workforce policy for OPM and assists 24 CFO Act agencies in Strategic Human Capital Management. In addition, he serves as a co-chair of the Federal Foresight Community of Interest (FFCOI).

He is married to Chelsea Hartz of Columbia Maryland and together they have two children; Lucas and Sydney. They reside in Odenton Maryland along with their golden retriever MaeDay.