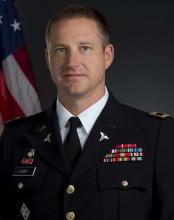 Chris Ivany was born in Madison, WI and attended Providence College where he majored in Biology and earned his commission into the United States Army through ROTC in 1997.  Chris then attended medical school at the University of Texas, Health Science Center in San Antonio, graduating with his M.D in 2001.  He completed his internship and residency in Psychiatry at Walter Reed Army Medical Center in Washington, D.C., where he served as the Chief Resident in 2004-2005.  He also completed a fellowship in Child and Adolescent Psychiatry at Tripler Army Medical Center in Honolulu, HI in 2007.

Chris has held several positions throughout his career.  At Ft. Hood, TX he served as the 4th Infantry Division Psychiatrist and deployed to Baghdad in support of Operation Iraqi Freedom 07-09.  At Ft. Carson, CO, he served as the Chief of the Department of Behavioral Health at Evans Army Community Hospital from 2010 to 2012. While there, he led the team that developed the Embedded Behavioral Health model of outpatient care for Soldiers, which has now become the standard across the Army.