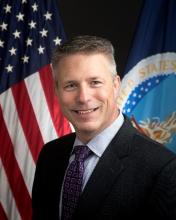 Chad Sheridan is the Chief of the Information Solutions Service Delivery and Operations Branch for the USDA Farm Production and Conservation Mission Area’s Business Center. He is responsible for development and operations for all information systems that support the FPAC mission area.

Sheridan most recently served as the Chief Information Officer of the Risk Management Agency from June 2011 to March 2018. In that role, he was responsible for all information systems that support the Federal crop insurance program, a program that covers commodities and livestock with a total annual liability of over $113 billion. At RMA, Chad has transformed the agency’s IT program to embrace agile development and devops while leading the effort to establish an action-oriented and collaborate CIO Council within USDA

Prior to his service at USDA, Chad spent over 18 years of active duty and civilian service with the United States Navy in the Naval Nuclear Propulsion Directorate, or Naval Reactors. He most recently served as Deputy CIO for the program and had previously served as Manager for Shipboard IT, focusing on improving the quality of shipboard networks and software and the capabilities and IT professionals on nuclear-powered ships. Prior to his transition to IT, Chad served as Deputy Program Manager for the design and construction of the USS GEORGE H. W. BUSH (CVN 77) and GERALD R. FORD (CVN 78) aircraft carrier propulsion plants.

Chad received his Bachelor of Science in Nuclear Engineering from the University of Virginia and is a licensed Professional Engineer in the Commonwealth of Virginia.