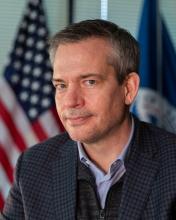 Bryan S. Ware serves as the Assistant Director for Cybersecurity for the Department of Homeland Security’s (DHS) Cybersecurity and Infrastructure Security Agency (CISA). In this role, Mr. Ware leads CISA’s mission of protecting and strengthening the nation’s critical infrastructure against cyber threats.

Previously, Mr. Ware served as the DHS Assistant Secretary for Cyber, Infrastructure, and Resilience Policy. In this role, Mr. Ware was responsible for leading DHS policy development in support of department-wide efforts to reduce national risks with a focus on critical infrastructure cybersecurity, federal network security, countering cyber-crime, and improving the security and resilience of the global cyber ecosystem, as well as national resilience initiatives that enhance Federal, State and local government and community preparedness and response capabilities.

Mr. Ware is an entrepreneur, founding an artificial intelligence company in 1998 which he led as CEO through multiple rounds of Venture Capital investment until it was acquired in 2013 by Haystax.  After serving as CTO of Haystax for several years during which he helped the company acquire leading cloud technology and cybersecurity companies, Bryan took over as CEO of Haystax in 2016 until its acquisition in 2018.  Mr. Ware started his professional career at leading Defense contractors working on advanced technology programs like the Star Wars program, early UAV payloads, and counterterrorism technologies.

Mr. Ware has been issued multiple patents in artificial intelligence and mobile technology.  He holds a degree in Applied Optics from Rose-Hulman Institute of Technology.