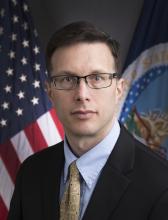 Bob De Luca is the Acting Deputy Commissioner of GSA’s Federal Acquisition Service (FAS) and the Acting Director of the Technology Transformation Services (TTS). The Technology Transformation Services applies modern methodologies and technologies to improve the public’s experience with government. TTS helps federal agencies build, buy and share technology to achieve their digital transformation and modernization goals. In his position, he oversees the Presidential Innovation Fellows, 18F, the Office of Solutions, and the IT Modernization Centers of Excellence, along with other offices that provide support across TTS.

Mr. DeLuca has more than twenty years of experience in technology modernization, business strategy, and U.S. military operations, working in both the public and private sector. Prior to joining GSA, he served as the Chief Information Officer at the Overseas Private Investment Corporation (OPIC), where he led several major transformation efforts including enterprise business systems modernization and cloud migration. These efforts directly contributed to OPIC's ranking as one of the most innovative agencies in the federal government. Prior to public service, Mr. DeLuca was a Captain in the U.S. Army and served as the president of two private technology consulting firms.

Mr. DeLuca earned a Bachelor of Science in Electrical Engineering from the U.S. Military Academy and a Masters of Business Administration from Drexel University. He is currently serving as a Major in the Maryland Air National Guard as a Cyberspace Operations Officer. Mr. DeLuca resides in Columbia, MD with his wife and two children.