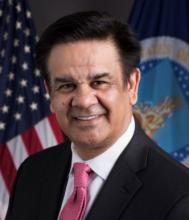 Bajinder Paul serves as the Deputy Chief Information Officer (DCIO) for the U.S. Department of Agriculture (USDA).  In this role Mr. Paul leads the operational components of OCIO that include enterprise services end user support, network and infrastructure services, and OCIO resource management.  Mr. Paul has more than 20 years of experience in the public and private sectors with providing strategic and operational leadership in leading large, complex information technology (IT) organizations, programs, infrastructure and investments. He also has a solid reputation in reducing operational costs, while enhancing the customer/user experience.

Prior to this Mr. Paul was the Assistant Chief Information Officer with the U.S. Department of Agriculture’s (USDA) Food Safety and Inspection Service’s (FSIS) Office of the Chief Information Office (OCIO).  In this role, he was responsible for leading the IT Modernization efforts for FSIS and ensuring the Agency’s IT needs were met.

Before joining FSIS, Mr. Paul was Executive Director of Technology Solutions and Strategies at ManTech International. In this role, he led corporate wide IT strategic planning of emerging technologies in support of federal agency missions. He has also held Chief Information Officer (CIO) positions at the Federal Trade Commission (FTC) and at the U.S. Department of the Treasury’s Office of the Comptroller of the Currency. He also was the Deputy CIO at the U.S. Department of Housing and Urban Development (HUD), and the Chief Technology Officer (CTO) at General Services Administration (GSA).

Paul is a nationally recognized recipient of the "Fed 100" award in 2008 and 2010, which recognizes the top 100 executives from the federal government and the industry. In 2011, he was the recipient of the National CIO Achievement Award.